This form is here because I would love for you to have VIP access and be among the first to know about sales, exclusive offers, new items and more.

free shipping on orders $49+ within the uSA

Rebeca Mojica has appeared in: 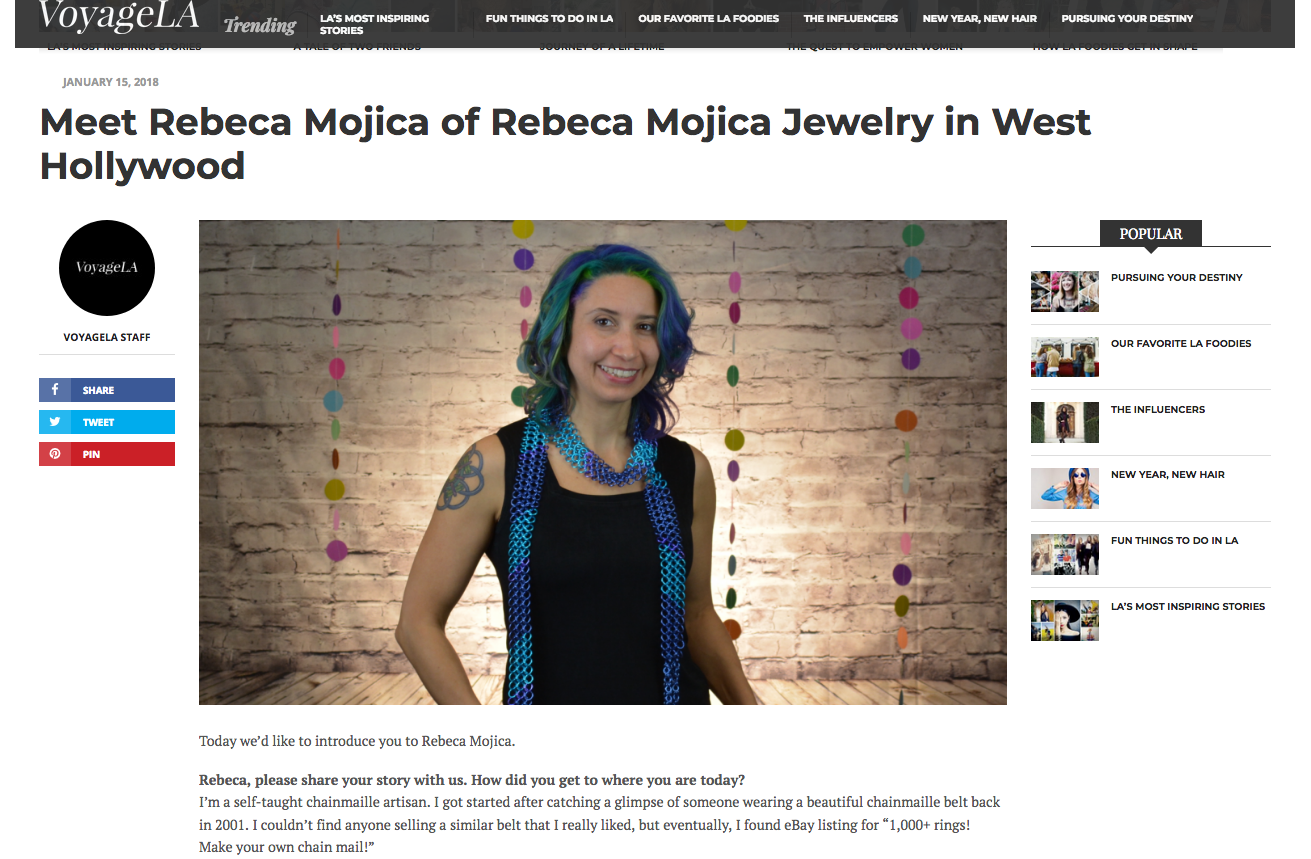 Two of Rebeca's pieces are featured, and her shop is named "Best Intimidating Jewelry" in the Chicago Reader's annual Best Of awards. (Poseidon's Embrace is shown in the online version and It'll Always Be Sears to Me appears in the print edition). Rebeca's chainmaille scarf is featured in the Christmas in July section. Rebeca Mojica and her work are featured in this 5-page article discussing Rebeca's signature chainmaille style, the beginnings of Blue Buddha Boutique, the chainmaille jewelry industry in general and the opening of Blue Buddha's brick and mortar retail store. Rebeca's jewelry at the Museum of Contemporary Art Gift Shop is mentioned in the article Perfect Presents at Museum Gift Shops. Rebeca's Shaggy Scales necklace is shown on the cover. Copper in the Arts (Copper.org) Rebeca's chainmaille mesh ring is featured as part of the Local Wares section. "If a diamond is forever, what does chain mail say?" Rebeca's haute couture piece “Poseidon's Embrace” is featured as part of the gallery section of this issue. Rebeca's Poseidon's Embrace necklace was featured at the "One of a Kind" Art & Craft Show at the Merchandise Mart. This item was also the featured art work on the show's signature shopping bags. Rebeca Mojica and the Blue Buddha Boutique booth at the "One of a Kind" Art & Craft Show at the Merchandise Mart. Examiner.com Rebeca's “It’ll always be Sears to Me” sculpture was featured in the Beyond Jewelry section of this issue. The Jewelry Connection on LiveVideo.com

Rebeca spoke with Mona Hair and Dr. Gail Devoid and answered listener questions in a 3-part video/radio interview. Rebeca tells how she discovered chainmaille and what inspires her as an artist. Rebeca Mojica was a featured artist on Art-onTV this fall. During the interview, she talks about how she got started in chainmaille and shows off some of her fancier pieces, like the Sears Tower sculpture and the micromaille necklace Poseidon's Embrace. The Craft Mafia: These do-it-yourselfers have a secret: It's better to work together
by Becky Schlikerman
photos by Heather Stone
The craft scene is exploding in Chicago, and this article describes how the Chicago Craft Mafia (part of the national Craft Mafia) and the Renegrade Craft Fair are supporting the new generation of local crafters and helping define the industry.

At the top of the article is Blue Buddha Boutique founder Rebeca Mojica with her black chainmaille scarf.